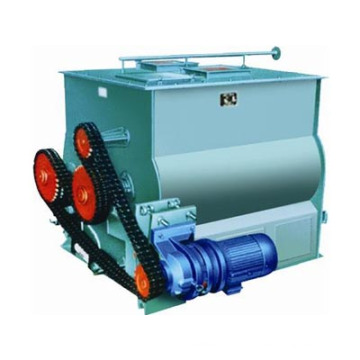 Dual shaft mixer is widely applied in chemical, biological, and construction material. It can mix powder, granule, and fiber especially in battery, construction, environmental, mineral and agricultural line.
With the most powerful motor, material can be mixed evenly in the shortest time. It is particularly good at mixing material with big difference in gravity, mesh size, fluidity. 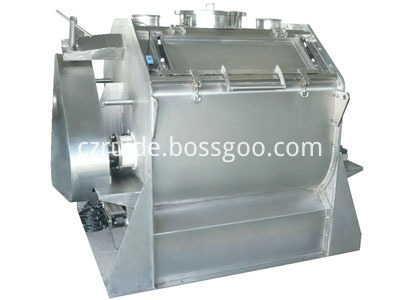 Working principle:
Dual shaft paddle mixer is a batch mixer with two counter-rotating shaft that are equipped with ten paddles, they overlap each other following the driven unit,Blades generate centrifugal force during high speed rotation, spilling the material to the upper part in the barrel, then material falling down (the vertex of material is in a so-called instant non-gravity state). Driven by the blades, material is mixed back and forth; also sheared and separated by the meshing space between the twin shafts; fast and evenly mixed in the end.

The two axes of mixing interior rotates to different sides and paddles attached to the axes forms fluidized area by diffusing mixed materials to different directions according to stable apex speed.At this time, the movement of materials is concentrated on the higher center part from the bottom of mixer, and therefore, the effective volume of mixing room increases, and as the effective volume increases, the collision and rubbing between materials decrease. Also, as the contacting section between materials and the mixing room, there is no damage because of collision and rubbing, and on the other hand, mixer itself does not cause inner rubbing because of material, so it keeps the shape of particle, and as it does not press rotating object or vent-less etc., it prevents the leakage of materials on the seal part and proceed mixing. Like this, zero-gravity mixer became created the new concept of powder mixing by solving problems of eruption and leakage etc, as well as precision of mixing.

Changzhou Ruide Drying Engineering Technology Co., Ltd. is a professional manufacturer of drying, mixing, granulating and grinding equipment. Our firm has strong technical force and adopts CAD system, with a modern workshop. Our company is located in the economic center of Yangtze River Delta - Changzhou. Our company has a large-scale manufacturing site. The engineers and technicians account for more than 70% of total staff members. In accordance with the national GMP standard, Our company has a professional team with support from Tianji University, Dalian university of technology and many other famous universities. We keep up with the latest international development within our scope and advocate scientific orientation. Our company is possessed with excellent means of detection and advanced conception of management. We can meet the requirements of domestic and international customers. The production of our equipment conforms strictly to the ISO9001 international quality management system. Their successful application is in the scope of pharmaceutical,chemical, foodstuff industries and so on, which has achieved the internationalization of the product quality. The honest and practical conduct of enterprise, excellent product quality, precise follow-up maintenance service and excellent after-sale service have gained us market and credit.

Email to this supplier